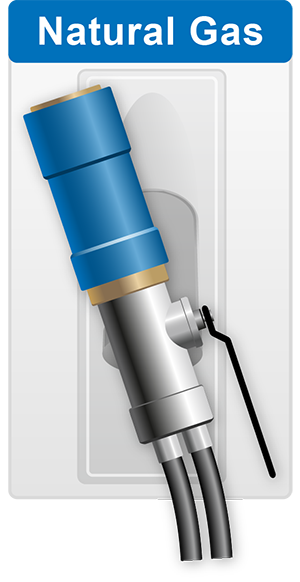 Natural gas is a domestically produced alternative fuel that is readily available to end-users through the utility infrastructure. It can produce significantly fewer harmful emissions than gasoline or diesel when used in natural gas vehicles.
Natural gas is a mixture of hydrocarbons, predominantly methane (CH4). As delivered through the pipeline system, it also contains hydrocarbons such as ethane, propane and other gases such as nitrogen, helium, carbon dioxide, hydrogen sulfide and water vapor.
Natural gas has a high octane rating and excellent properties for spark-ignited internal combustion engines. It is non-toxic, non-corrosive and non-carcinogenic. It presents no threat to soil, surface water or groundwater.
Natural gas accounts for approximately one quarter of the energy used in the U.S. Of this, about one third goes to residential and commercial uses, one third to industrial uses and one third to electric power production. Only about one tenth of one percent is currently used for transportation fuel.
Compressed natural gas and liquefied natural gas are considered alternative fuels under the Energy Policy Act of 1992. The horsepower, acceleration and cruise speed of natural gas vehicles are comparable to those of equivalent conventional vehicles. Compared to conventional diesel and gasoline vehicles, natural gas vehicles can produce some emissions benefits.

There are three types of natural gas vehicles: