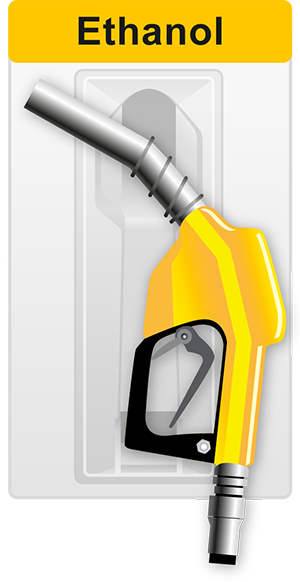 Ethanol is a renewable fuel made from corn and various other plant materials collectively known as “biomass”. The use of ethanol is widespread, with more than 95 percent of U.S. gasoline containing ethanol in a low-level blend to oxygenate the fuel and reduce air pollution.
Ethanol is also available as E85, a high-level ethanol blend containing 51 percent to 83 percent ethanol, depending on geography and season. The blend can be used in flexible fuel vehicles which have an internal combustion engine and run on either E85 or gasoline. According to the U.S. Energy Information Administration, there are more than 8 million FFVs on U.S. roads today. However, many flex fuel vehicle owners don’t realize their car is an FFV and that they have a choice of fuels.
Other than employing an ethanol-compatible fuel system and powertrain calibration, FFVs are similar to their conventional gasoline counterparts. The only difference is the fuel economy is lower when FFVs run on ethanol. Their power, acceleration, payload and cruise speed are comparable whether running on ethanol or gasoline.

There are several steps involved in making ethanol available as a vehicle fuel:

Ethanol as a vehicle fuel is not a new concept. Henry Ford and other early automakers suspected it would be the world’s primary fuel before gasoline became so readily available. Today, researchers agree ethanol could substantially offset our nation’s petroleum use. Studies estimate ethanol and other biofuels could replace 30 percent or more of U.S. gasoline demand by 2030.
More Information Located on the Alternative Fuels Data Center: http://www.afdc.energy.gov/fuels/ethanol.html